Another short, cold ride today (wind chill -10C) but at least I got to see some animals that I haven’t seen for a while.  I was standing on the viewing platform on Big Lake when I noticed some movement on the ice a few hundred yards out.  Looking through the deck binoculars, I could see that it was a coyote in search of a meal.  It was quite far from any open water, hence nowhere near where the remaining waterfowl are gathered, and, as I watched, it turned and started trotting towards the nearest shore in defeat.  Although I have seen many coyotes there in the past, and I know that at least 1 pack lives in the woods nearby, this is the first time this year that I have seen one.  Too far away for a photo though.  And just as I was about to leave, I caught a glimpse of a large brownish-black bird fly past.  It was one of the immature bald eagles that my wife had seen out there and told me about.  Again, it was too far away by the time I got my camera out to get a photo 😦

I was more successful taking pictures of stationary evidence of the wildlife, like the small animal tracks (fox, probably) in the wetland.  Now that snow is covering the ice, you can see the tracks of the mammals and birds that decide to go on a walkabout.

Fox tracks on the ice in the wetland.

More tracks in the swamp

Birds that are confined to the small leads of open water in the river are easy targets too, like the ducks and tundra swan below.

Ducks and a tundra swan coping with the ice

I went for coffee at a shop that I used to patronize often a few years ago but haven’t been to in a while, the Second Cup in Inglewood Square.  It is off my usual cycling route and doesn’t have good bike parking so it has fallen off my radar.  But it does have good coffee, for a chain, and yummy treats. 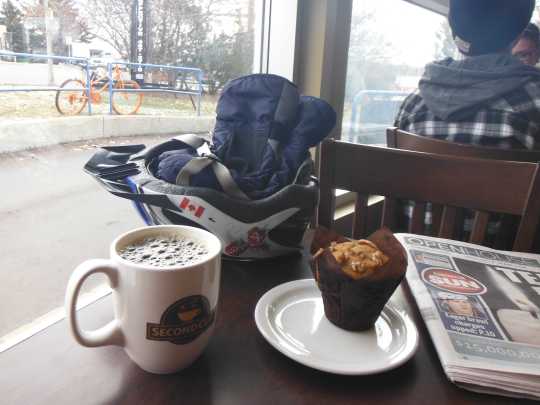 Ahh – warmth and treats! With my helmet stuffed with tuque and mitts.  And not my bike thru the window – it’s an ad for a fitness club in the same shopping centre.

This is 6 coffeeneuring rides done, 1 more to go over the next 2 weekends!  With the weather supposed to get above zero next week (finally), completing the challenge should be a piece of cake.  Or donut…

Details: Cold, with a chance of critters.

It was bound to happen – we finally got our first snowfall yesterday, albeit minor, and our first sub-zero ride today.  We arranged to start our ride at 11 a.m., instead of the usual 10 a.m., to give it a chance to warm up.  Umm…, not so much.  It stayed at -3C all morning, although the wind chill did fall from -10C when we started to -8C by the time we finished.  Needless to say, the ride was short and the coffee break was long. Actually, at 14.8 km, it was the shortest ride we have done all season.

Bob led 5 of us (another 3 intrepid souls started off at 10 a.m.), from Hawrelak Park, up MacKenzie Ravine, and over to the Second Cup on 149th Street.  We lingered considerably longer than we usually do in the coffee shop to let the blood flow return to our toes and fingers.  I wore my balaclava, so my head and face were warm, but even with insulated biking gloves my fingers were uncomfortably cold.  Next sub-zero day I think I’ll wear my ski mitts! No adventurous detours today, as we did pretty well a direct route back – down MacKinnon Ravine, over Groat Bridge, around Emily Murphy Park and into Hawrelak.

The gravel trails in Hawrelak, the south side of the river and up MacKenzie Ravine were in pretty good shape, all things considered.  The were a few frozen puddles, avoidable, but you had to be careful riding on the pervasive leaf cover ’cause you just knew that they hid a skating rink beneath.  So the ride was slow and careful.  Nobody wanted to ride fast anyway – there was already enough of a wind chill and even a minor sweat would turn uncomfortable real quick.  Looking forward to warmer temperatures this weekend.

Coffee at 149th Street Second Cup. I had my ski mitts in my pack (and wind pants and tuque) but never dug them out. My fingers were unhappy with that decision.

Biking up MacKenzie Ravine. Snow lingering on the tree branches, not much on the ground. Temperature -3C.

Again, I’ll be keeping this coffeeneuring ride in reserve in case the weather prevents me from getting enough rides in on my “official” coffeeneuring days of Friday and Saturday before November 11th.

The weekly Tuesday and Thursday bike rides for the ski club officially ended on October 4th but many of us continue on “unofficially” until we get a permanent snow cover or until it is cold enough for the local skis hills to open on either natural or artificial snow.  Last year, we were able to bike well into November and I had a hiatus of only 6 days between a self-imposed end of biking season (too freaking cold) and beginning of skiing.  I find it much easier to dress appropriately for downhill skiing when it is below zero than for biking.  At least I don’t have to climb the ski hills whereas, on a bike, getting out of the river valley is a heat-inducing grunt that just invites hypothermia.  I ride for fun and fitness, not out of need for lack of a car or an ecological principle.  Once the hills open, I just change one form of fun for another.

Although the forecast for this week is for cold and a rain/snow flurry mix, it is supposed to get back into the double digits by the weekend.  Today was a bit chilly, at a cloudy 5C, but there was no wind and everyone dressed warm. Chris led a group of 7 riders on a ride from Hawrelak Park (top of map) on a nice circuit of the single- and double-track trails in Terwillegar Park and back to Hawrelak.  The total ride was 29.5 km.  The dirt trails in Terwillegar were in prime condition – dry, hard packed and nobody else on them except for some dog walkers.  Thank goodness the walkers avoid the single tracks.  I’d hate to meet someone coming the other way on some of those trails! And no other bikers, seeing as that it was a weekday. And cold.

The city of Edmonton maintains over 160 km of trails in North Saskatchewan River valley within the city limits and there are many more unmaintained kilometres that are used by the hard core mountain bike set.  I am sure that we managed to bump our way down (and up and along) some places where seniors are not usually found!

Coffee was at the Second Cup at Rabbit Hill Rd and Terwillegar Dr. (at bottom of map).

I am not going to count my mid-week rides in the Coffeeneuring Challenge but I am going to keep them in reserve, just in case old man winter decides that he isn’t going to give me 6 more (5 now) weekends this year!

Coffee at the Second Cup. And goodies, of course.