After yesterday’s long ride, Paul said that today was going to be a short day but a hilly one. He was right. We left Hlebec’s, sadly, and started with the hills right away. We were still in wine country after all! There were a few 10-12% climbs that made our lungs and legs pay attention but they were short, less than a kilometre, and Paul always stopped at the crests to let the stragglers catch up. At one particular crest, we stopped outside a house where a farmer was working in his garden. It was a good hill and the group was pretty spread out, so we ended up waiting for longer than usual. All of a sudden, the farmer comes out to the road with a bottle of wine and a bunch of glasses! Slovenian hospitality strikes again! If you linger too long in any one place, someone will offer you wine! 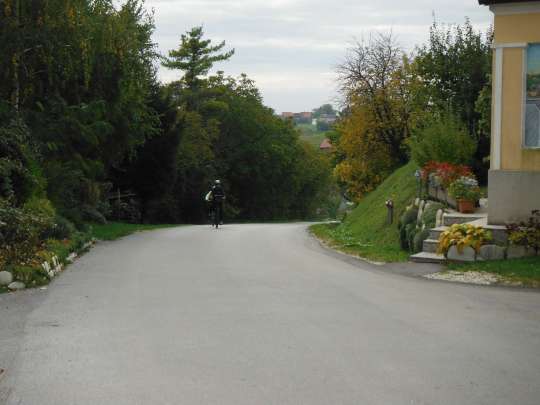 Back to grunting up the hills.

Slovenian hospitality knows no bounds! Offered wine by a complete stranger, we could not refuse.

The views of the countryside were breathtaking. The vineyards, the fall colours, and the rolling topography (breathtaking in its own way) really make this a special area to ride in. 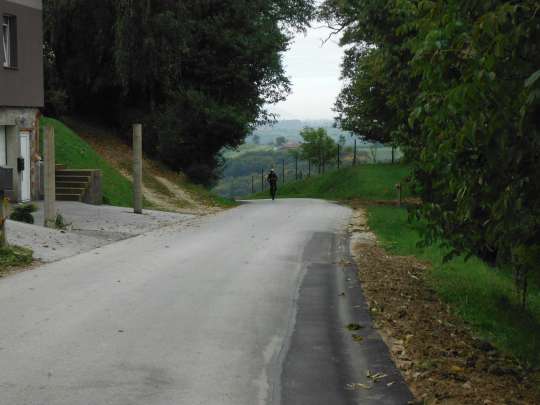 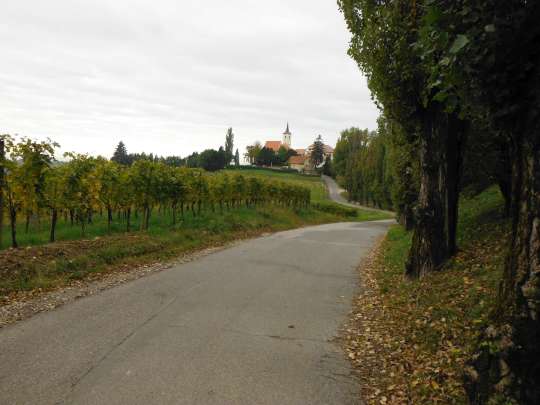 …but the views are worth it.

And vineyard after vineyard.

We stopped to peruse the souvenir items in a tourist office after 12 kms. and stopped for lunch after 15 kms, so got lots of breaks on this hilly day. The tavern at which we ate, at the top of a hill of course, had great views and a nice comfy atmosphere. A fellow was setting up musical equipment for a birthday party later in the day. “Whose birthday?” we asked. “Mine!” was his reply. He asked where we were from and knew of Edmonton as his aunt had moved to Calgary many years before. True to form, the owner gave us complimentary glasses of his wine with our lunch. Slovenians are rightly proud of their wine!

After leaving the tavern, we had a few more kilometres of rollers followed by a 4 km exhilarating downhill onto the plains again. Woohoo! We rode on for another 9 km to the Bioterme hotel and spa, our home for the night.

On the way to Mala Nedelja and the Bioterme.

And nice flat roads for a change.

After getting our room reservations sorted out, we all had a bite to eat in a mediocre, at best, cafeteria, then ventured into the hot pools. Or, I should say, warm pools. Neither of the spas we stayed in had pools even remotely as hot as the ones in Jasper or Banff. They still felt good though and we soaked for an hour, joined by Paul and Julie. Lucille, JoAnn and I went up to the coed sauna area but on seeing the sign saying that bathing suits were not allowed, we chickened out. Unknown to us, however, Al was already in one of the saunas! He didn’t stay long though, not being that comfortable with the nudity.

After leaving the sauna, Al went for a half-hour walk up the hill to scout out the small town of Mala Nedelja. We didn’t want to eat at the hotel cafeteria – the only choice there – and Al reported back that there was a restaurant in town. So we all trooped up the hill, found the place and had a tremendous meal. There was only one employee there when we entered, and no other customers, but she must have phoned for reinforcements. Soon there were 3 of them providing us with jugs of wine, cooking and serving. I think the place was the Gostilna Slekovec Marija. We walked back down the hill in the dark, happy and full from the meal and the company.

Total distance for the day was 30 km.