We came down to breakfast to the sound of accordion music coming from the CD player. I guess there is just no way of getting away from it here. Shortly after we finished, Paul showed up to drive us all back to Ljubljana. Not before we had a look through the Firbas gift shop though. Another thing we discovered about Slovenia, besides having great wine, is that they also provide pumpkin seed oil at every table in addition to olive oil and balsamic vinegar as a salad dressing. Pumpkin seed oil is delicious! So a number of large and small bottles of the oil were purchased to take home. None of us have ever seen it in Edmonton.

It was a beautiful, sunny day and it would have been nice to ride but our tour was over, so we settled in for the 2 hour ride back to the city. Paul dropped us off at the City Hotel and left to meet up with Julie and Steve, who were also staying in town overnight before flying home to England. We arranged to meet up at 7 p.m. by the pink church and go for a group supper.

We were early for our rooms but were able to stow our bags in a back room before setting out for a sunny explore, in contrast to the wet one we had the previous week. The city looks far better in the sunshine and it was much busier and the market square was full of vendors.

A dry and sunny market square.

We wandered on the riversides, back and forth over a number of the bridges. Most of the bridges, both pedestrian and vehicle, have some artwork displayed. Eventually, we found a food festival that takes place every Friday during the summer and this would be the last one of the season. Various restaurants had set up tents, kiosks and food trucks and were doing a booming business. Not only food though – you could buy beer and wine to drink with your food preference. It took us a while to find a sitting area large enough for us (almost- Lucille and I had to share a stool, 1 cheek each) and we ate, drank and people watched.

One of the 4 dragons, 1 at each corner of the Dragon Bridge.

Adam and Eve exiting the Garden of Eden, one of the sculptures on the Butcher’s Bridge.

The crowded food festival. Lots of locals and fiit-looking out-of-towners, likely here for the marathon on Sunday.

We went back to our hotel and checked in, then back out again to get some info for the next few days and see the castle. We wanted to see one of the cave areas and, based on a Rick Steves recommendation, decided to visit the Škocjan Caves, about an hour south of the city. Combined with wanting to drive to Lake Bled on Sunday, we decided to rent a car for both days. Lucille wouldn’t be able to join us on Sunday as she had decided to be a bandit in the Ljubljana Marathon, i.e. run it without registering (she found out about it too late to register).

We took the funicular up to the castle and enjoyed the views from the top of the walls. 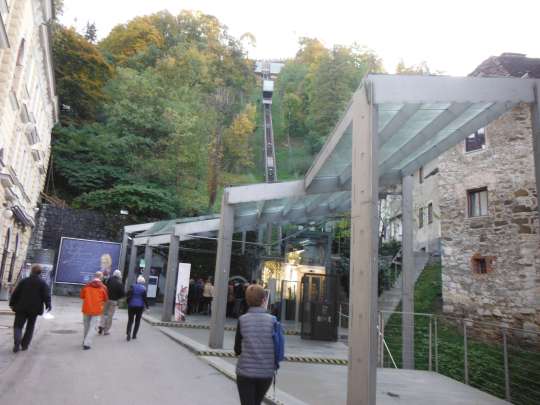 The castle funicular. We could have walked up but…it’s a funicular! 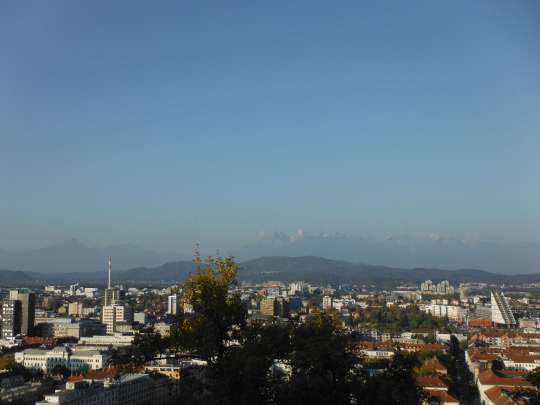 View from the castle walls the snow-covered Julian Alps in the distance. We would be there on Sunday.

The fall colours, looking down to the Triple Bridge and Preseren Square (centre of picture).

As scheduled, we met the SimplyCyclingSlovenia group and went to a restaurant recommended by Paul. As often seems to be the case, service was chaotic but the food was good. We said goodbye to Paul, Julie and Steve and got back to our hotel by 11 p.m. Again with the goodbyes, this time to Gwen and Stan who were leaving Saturday. We would be getting up early to get the car and drive off and they didn’t want to get up that early. So now we were five.