Spent the middle week of February at Panorama Mountain Village, outside Invermere, B.C.  It was my first visit there and Panorama was an eye-opener for me in more ways than one.  It is aptly named, as the view from the top of the Summit Quad is absolutely spectacular.  With Mt. Nelson and Mt. Trafalgar very prominent to the west and, on a clear day, Mt. Assiniboine poking up over 60 km away to the NE, the shear number of craggy peaks surrounding the ski hill is impressive.  There was hardly a run that didn’t offer multiple photo ops, with new perspectives popping up all the time. 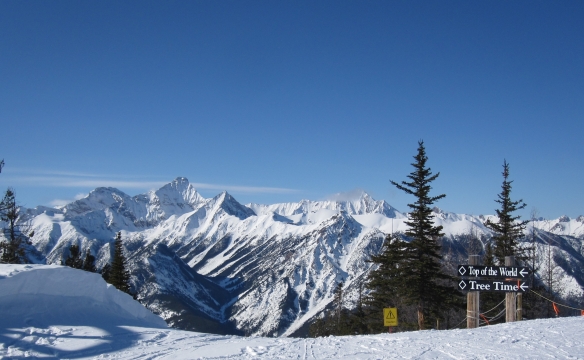 Top of the Summit Quad - The peaks to the west, with Mt. Nelson (highest) and Mt. Trafalgar (next to the right) prominent

Before going on the trip, I had heard good reports about the mountain but all contained the warning that, if it hadn’t snowed in a while, the conditions could be somewhat, um, “slidey”.  Well, actually, they used that dreaded word – icy.  I checked the website snow report almost daily before leaving and, as fate would have it, the snow gods had used the previous week or more to slack off.  Sooo, with no new snow, this trip started with some trepidation.

Bright and early Monday morning, a large portion of our group met with the “Mountain Friends”, the volunteer army of local ski hosts who tour newbies around the mountain.  I initially lined up in the blue/black group but, when the host said they were going to do a few bump runs, I figured that discretion was the better part of valour and bailed to the blue group.  Not that it made any difference.  In the ensuing 2 days we skied almost every area of the mountain.  We did blues but it seemed that their only purpose was to lead us to ever steeper and bumpier black runs!  The only area of the mountain that our host kept us away from was the double blacks in Taynton Bowl.  And we got real up close and personal with the infamous icy patches of Panorama.  Not that our host ever referred to them as that.  Runs were variously referred to as “being a bit skied off”, “a little sketchy”, “has some smooth patches”, “noisy”… anything but “icy”.  But when you try to dig an edge in and your ski just skips and chatters sideways down the fall line you know you aren’t in cruising territory any longer.  Glad that I gave my skis a tune-up before we left – I’d hate to ski there with dull edges.  Might as well be on a toboggan.  I was certainly outside my comfort zone at times but I surprised myself at how well I coped with the terrain and the challenges, albeit not with much elegance.  Most skiers, unless they are experts, are going to feel a tad tentative on a new mountain and underestimate their abilities.  The hosts did a great job of showing us that we could handle almost anything the mountain threw at us and gave us the confidence to explore on our own for the final 2 days. 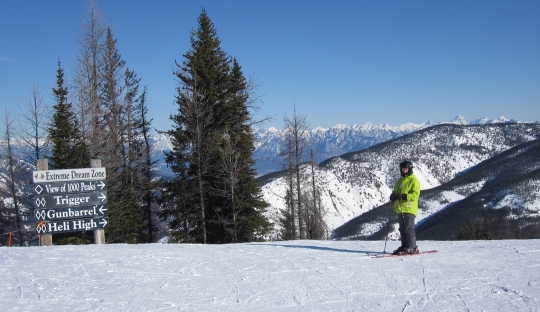 Overall, I would have to say that my Panorama experience was worthy of repeat trips.  What really stood out, though, and was as eye-opening as the vistas, was the attitude of every staff member on the mountain – lifties greeted you with a quip and a smile both at the bottom and top of the chair, restaurant staff were cheerful and friendly, and the Mountain Friends did everything they could to ensure you enjoyed their favourite mountain (except for providing a few inches of new snow every night).  Panorama is definitely the friendliest resort that I have visited.  Management, and their worker bees, at every other ski resort could learn a valuable lesson by visiting this place and taking a few notes.